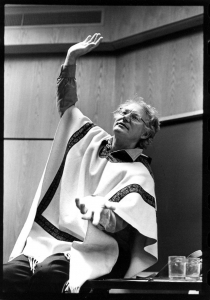 The great poet, Robert Bly, died recently as many Open Center readers will know. Robert was a true friend of the Center and a regular presenter and performer with us for quarter of a century.

Nobody led a poetry evening like he did, with his encyclopedic knowledge of much of the world’s deepest poetry. There were so many memorable evenings at our former home on Spring Street when Robert, with his multi-colored vests, his shock of white hair, and his simple but effective bouzouki strumming, both elevated and deepened the audience. We emerged into the Soho night drenched with soul. Whether it was the work of the great Sufi poets, Rumi and Hafez, or the Spanish mystics like Antonio Machado, or his own evocative poems, the event was always deep and joyful and the alteration in consciousness palpable.

Beneath Robert’s gruff and somewhat formidable exterior, was a man of great sensitivity and insight. Like James Hillman, whose psychological astuteness and iconoclasm he valued, he knew that we need to go downward into the realm of soul – certainly before we can go upward to the realm of spirit. His own spirituality was grounded in a deep understanding of the pain and suffering that often accompany a spiritual journey.

Robert was also very politically outspoken and sharp. A leader of the opposition to the war in Vietnam, he cast a withering eye on reactionary politicians. And he was a pioneer in the need for clearer and more open communication between men and women. I vividly recall a packed evening at Cooper Union with Robert and Deborah Tannen, the authority on speech and language, exploring how to enhance communication between the genders.

Though most of his obituaries mention his leadership of the Men’s Movement after the enormous success of his book on the fairy tale of Iron John, it was his deep spiritual attunement and soulfulness that stay with me. He was a vital part of the Open Center’s Esoteric Quest conferences in Bohemia, Florence, Andalusia and elsewhere, and would always take the audience to a deeper place with his hypnotic recitations of poems. He liked to make sure that we grasped the depth, subtlety and insight of each line.

His last words to me, spoken in front of the Alhambra during an Esoteric Quest for the Golden Age of Andalusia, were, characteristically, very much to the point. We were standing side by side during a break in the proceedings. He turned to me and said simply, with no preamble, “You do what you can, then you die!’

Robert Bly did a lot for this world through his poetry, his translations, his editing, his cultural insights, and his political courage. He was a soul of great depth, brilliance, and integrity who could move an audience to the core of their being.

So, with deep gratitude for all he gave, we wish him … 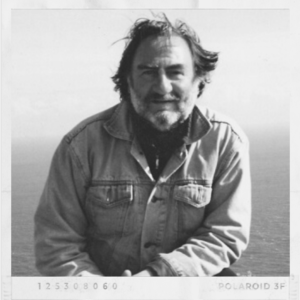 Ralph White, is co-founder of The Open Center and currently serves as Senior Fellow and Conference Director. Since The Open Center’s inception in 1984 he has created hundreds of programs across the spectrum of holistic learning. In particular, he directs the Esoteric Quest conferences in Europe, the Western Tradition that have now continued for twenty years, and the Art of Dying conferences  that address the emergence of a more holistic understanding of death in contemporary America. From 1995 to 2001 he edited Lapis Magazine, winner of the Alternative Press Award 2000 from Utne Reader. A writer and speaker, he is the author of the memoir, The Jeweled Highway: On the Quest for a Life of Meaning.