Meet Ken Cohen, a Qigong and Tai Chi Grandmaster has practiced these arts since 1968.

How did you become interested in this line of work? (tell us a little bit about your background)
In 1968, while attending a seminar presented by Alan Watts, during the lunch break I saw someone doing an eerie slow motion exercise. I was immediately enchanted and found out that it was called “Tai Chi.” I signed up for classes within a few weeks and then continued with both Chinese Martial arts and Qigong. Qigong is the art and science of using posture, exercise, breathing and meditation for wellbeing and improved athletic performance. A few years later, I also began studying the Chinese language, with a special emphasis on classical Chinese poetry and Taoism.

I have continued these studies right to the present. I think that I advanced especially quickly because I had the virtue of “intelligent stupidity.” That is, even though I was an unhealthy teenager, I didn’t know that these arts were supposed to improve health. I was not hindered by greed, goals or a desire to quickly get a degree and find employment. Instead, I stayed with the unfolding process, like listening to music – you don’t listen to music to reach a goal, to reach the end or the last notes. I studied only because I enjoyed the practices.

They made me feel more alive, made my mind peaceful and increased my self-confidence. About midway through my career I became very interested in scientific research, how and why qigong and Tai Chi improve health. As a result, I became the first person to lecture about these ancient arts in U.S. medical schools – including Grand Rounds presentations at the Mayo Clinic and many universities. I was also one of nine “exceptional healers” chosen as a research subject for experiments in measurable aspects of healing power (“qi” in Chinese) at the Menninger Institute. I have had the honor of being the sole world-wide representative of Chinese Medicine at the World Congress of Energy Healing in Switzerland and am the recipient of the Alyce and Elmer Green Lifetime Achievement Award in Energy Medicine.

I write extensively about these various topics and am the author of several books, including The Way of Qigong: The Art and Science of Chinese Energy Healing (Random House) and more than 200 articles. My passion extends beyond the technical “how to” aspect of Tai Chi and Qigong, as I believe that the larger cultural context of these arts can be a powerful antidote to the stress of our world.

Please share a wellness tip or word of advice that relates to the workshop you will be presenting.
If there is pain, there is no gain. You read that correctly. We practice and learn together, exploring the miracle of the human body. As one of my teachers said, “The ordinary is the extraordinary.” You will learn enjoyable, yet gently challenging ways of improving posture, breathing and mindfulness while replenishing your reservoir of healing energy (qi).

What or who inspires you? (This could be anything from your mentor to your favorite quote)
I am inspired by nature. Quiet your mind and observe: all of nature is dancing, all of nature is doing qigong, flowing with the energies of life. Watch the passing clouds, the grasses swaying in a breeze, the pine bough bending gracefully under the weight of snow. I am also inspired to keep practicing and sharing by improvements in health and well-being reported by so many of my students.

What personal or professional accomplishments are you most proud of?
Yes, I am proud that I won the international lifetime achievement award in energy medicine. Yes, I am proud that I introduced qigong in US medical schools and have counted many physicians among my students. But what am I most proud of? My daughter — who works for wildlife and fish restoration and protection and is a volunteer ranger in her spare time. Qigong is not just for ourselves; if we are examples of qi (healing energy), we can make the world a better place. 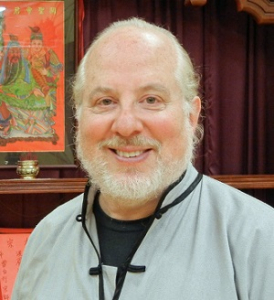 Ken Cohen, MA, Qigong and Tai Chi Grandmaster has practiced these arts since 1968. He is the winner of the International Lifetime Achievement Award in Energy Medicine and is the author of The Way of Qigong (Random House) and more than 200 articles on spirituality and health. Ken was the first person to teach qigong in North American medical schools and has been hosted by numerous health and cultural organizations.