It’s hard to believe it’s been twenty years since 9/11.

A lot has happened over the course of these twenty years: the US entered the second Gulf War, the Human Genome Project was completed, Facebook was invented, Barack Obama became the first African-American president of the United States, same-sex marriage became legal in all 50 states and a devestating pandemic swept across the globe.

And yet, the memory of the tragedy on 9/11 remains fresh in our minds. We continue to mourn the loss of nearly 3000 Americans, honor the heroic acts of first responders, pray for Afghanistan and maintain our promise to never forget.

In the aftermath of 9/11, NYC inspired the world by coming together to heal. Now today, as NYC and the rest of the world continues to grapple with COVID-19, 9/11 serves as a reminder of our collective strength and resilience to endure–and overcome–the darkest and most challenging times.

To honor the twentieth anniversary, we invite you to join Ralph White, co-founder of The Open Center, for reflection and deep meditation on the tragedy that took place in this country on September 11, 2001. 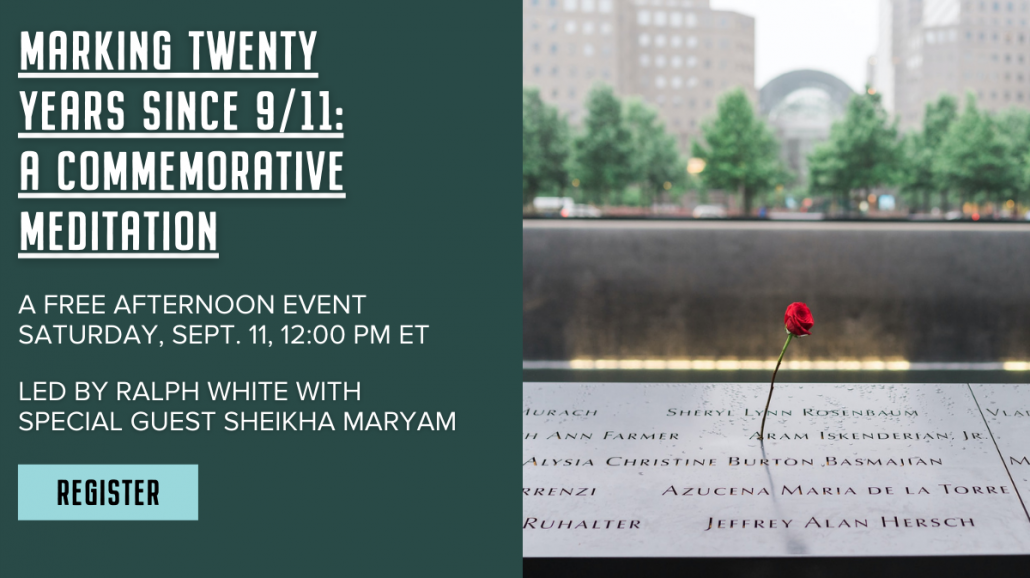 In attuning to this deeply symbolic moment, we will contemplate the passage of the last twenty years, ponder its many lessons and send our love and compassion to the long-suffering people of Afghanistan.

Let us take those powerful feelings into meditative silence, and aim to transform them into forces of wisdom and clarity.

We will be joined by Sufi teacher, Sheikha Maryam, author of, Journey Through Ten Thousand Veils.